On this day in 1995, a Saturday evening, MAYHEMIC TRUTH and DIMMU BORGIR were playing the closing day of what would become Under the Black Sun, but in 1995 was simply Folter Open Air.

Not all bands were filmed, but some footage has survived - watch below!

Organised by the German label, the complete line-up for the two-day festival in Brohm, north-east Germany was: 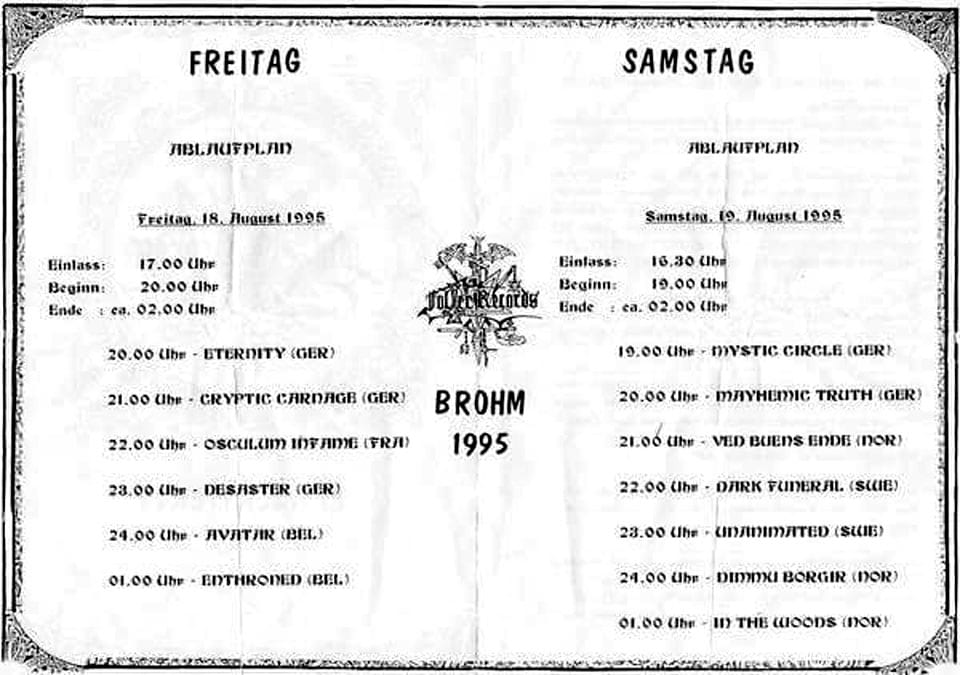 Besides our very first show at Luse Lottes Pub in Oslo on May 4th, 1994, this was our second show outside of Sweden. What make this one very special, is that it was the very first show with Emperor Magus Caligula on vocals. Beside, Themgoroth made his very last live appearance with us, playing bass only, before he left the band, something that was already decided before we flew to Germany.
Anyway, one thing is for sure. When we start touring with Dark Funeral, we did it HARDCORE! No fancy backstage rooms, no fancy hotel rooms, sometimes only cold water in the showers, if even a shower available. No fancy tourbus, but rather a small van where we took turns sleeping on the floor verses the seat, summer as frostbitten winter, all the same, just colder during the winter. And no computers or cellphones.
Nowadays when I look back at all of that, I'm truly glad I went through, and learned it all the hard way. It have definately given me a stronger skin. It also make me appreciate touring under better conditions these days so much more than if I had been thrown into it at this stage. However, the travel schedules, flights & airport life will always be more or less the same, boring & tiring. And you know what, in the end of the line its that hour onstage together with the fans/crowd that makes it all worth it.
Going back to this one show at "Under The Black Sun Festival" in 1995, I remember we stayed at Folter Records shop in Berlin, where we slept straight on the floor before we went by train to the festival. Good times indeed! / Lord Ahriman
- Dark Funeral, Facebook, 2017

Footage is rare from this event, and so far no video or photos of either VED BUENS ENDE or IN THE WOODS... have been found. Starspawn Phty has salvaged some of his photos. You can find them and some comments in his Facebook gallery.

There are quite some pictures missing, Ved Buens Ende and In The Woods amongst them. I'm afraid they got lost when I moved. - Starspawn Phty

I was at this festival and they told us that taking pics of ITW was forbidden and they would cancel the concert. But Ved Buens Ende ... don't know. I have the concert on video (VHS) but also no VBE. - Oliver Heide