The l.p. is the sickest, heaviest, and best thing to date. It has all the songs from the "Giallo" demo on it, but I think it has better production and the vocals are heavier. The l.p. will have 16 songs altogether, some old and some new. It'll be a really sick, noisy, fast, grindy l.p.. The production is our best yet but still not as good as we were hoping. It's horror/gore on vinyl.
- Mark Sawickis / Impetigo interview, Rot Zine #2, 1990

After three days at Creative Space Studio in Bloomington, IL, IMPETIGO completed recording their debut album, Ultimo Mondo Cannibale, on this day in 1990.

It was done in about 30-40 hours in a 16-track studio so it has good sound and it will have 16 songs on it. The cassette and the Lp have slightly different tracks on them but for the most part they are the same. The Lp has all of the songs from the "Giallo" demo on it and alot of new songs and some old songs have been totally reworked to make them better. At the time we recorded it we basically recorded every song we knew at the time. It's called "Ultimo Mondo Cannibale" which is a cool title of a movie about, you guessed it, cannibals! We are huge movie fans so that will explain why we chose it and Stevo, although he only speaks English, has a pension for using foreign languages in our titles, what a nut.
- Mark Sawickis / Impetigo interview, Isten #5, 1990

When we did the first mix we didn't like it. So we re-mixed it and we had to book time again so that set things back. Then when Stevo finally got both the l.p. and cassette covers done (there were originally two separate covers) the art was rejected because it was too sexually violet and explicit. So Stevo had to draw an entirely new cover and have Cannibal Jim color it and that set us back another 2-3 months. We finally got the test pressing but alas, the song order was really fucked. So they have to be redone, expect another 2-3 week delay. Look for the l.p. to finally be out in late September/early October.
- Mark Sawickis / Impetigo interview, Rot Zine #2, 1990

The album was released later in the year by Wild Rags.

...we just have a deal for our debut Lp, but usually with Wild Rags if your record gets a good response they will do something else with you in the future but we are free to accept any deals that come along so it's a very open contract. We pay for the recording but Wild Rags does all the pressing (with full color covers) and a lot of promotion too. It's just the right size of a band like us. We will see what the future holds once the Lp is out.
- Mark Sawickis / Impetigo interview, Isten #5, 1990

As these interviews explain, the original artwork was rejected by the printing company, so an alternative design was created. You can see an early version of the original cassette cover in the flyer below. 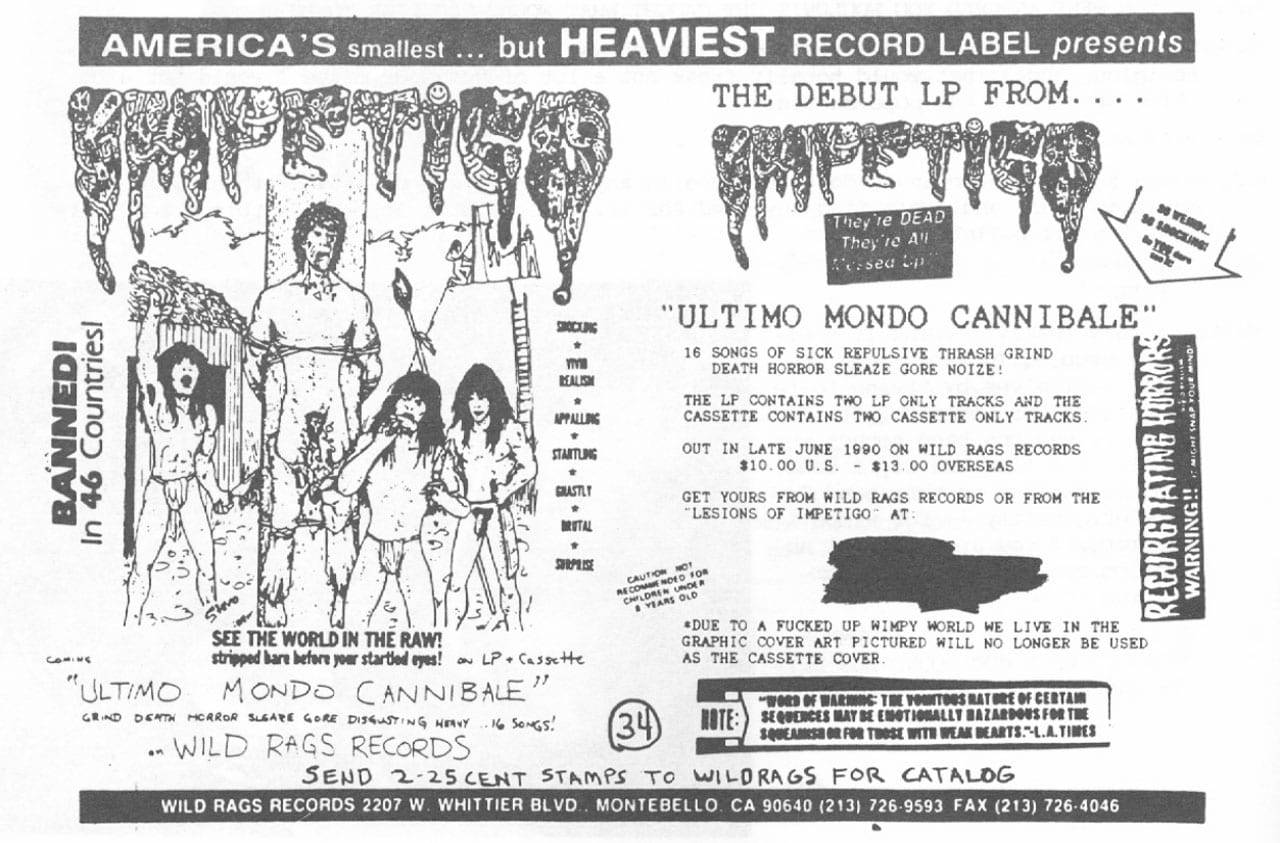 ...anyway he did the covers and they both pertained to a cannibal theme and they depicated things such as penises being cut off and eaten, rape, graphic cannibalism and lots of nudity so naturally we were up against a wall in this nation of extreme cencorship. First the trouble started when Stevo made a flyer with the cassette cover art on it and passed them out and some kid's parents thought it was bad enough to complain to the city council and they sent letters to the record stores here saying that if they sold the record to kids under 18 they would be prosecuted for selling pornography as the art violated 3 town pornography ordinances. We told our label about this and he still intended to put out the cover art, but then the company that does all his Lp cover printing refused to print it and the NUCLEAR DEATH poster. With all this trouble and all the legal bullshit going on in the US we decided we had better change our cover art. Stevo and Jim did the cover again and it is still very cool and the colors are great but gone is the nudity and graphic gore and dismemberment. There is also just one cover now as Stevo didn't have time to draw two. That really delayed the Lp release but we didn't have much of a choice.
- Mark Sawickis / Impetigo interview, Isten #5, 1990

Recent reissues from Razorback and Hells Headbangers have used the original, uncensored, artwork on their covers.

I describe our sound as death grind horror gore sleaze noize, well actually I think Stevo said that but I agree. It doesn't really sound like alot of other bands, we aren't just one style. We just try to be sick and Stevo has a very bizarre vocal style but he is as well as the band, very much into the songs and they give you a nice feeling when you play them. We just try to be sick, weird and heavy but we don't sit there and say: "Oh, that sounds heavy or that's not heavy etc." it just sorta comes out in the songs. They are not ultra technical by any means but they have their share of changes here and there. As far as progressing our sound I think we are quite happy where we are. I think too many bands keep trying to progress their sound but then get wrapped up in being technical and they lose their raw edge and heaviness. That's not what IMPETIGO is about, we are not trying to set musical standards or be gods, we just do what we like to do and have fun at it.
- Mark Sawickis / Impetigo interview, Isten #5, 1990