The basics were recorded at the end of the last summer. We've let them "ripe", we recorded 12 or 13 songs. We've choosen seven which will be out on the album. The reason there are so few songs is that we have three songs which are more than ten minutes long. So we have one hour of music although there are only seven songs. The album was recorded in the same old studio, Heavenshore in Stockholm, and was produced by me and BOSS. We've mixed everything now and put it out on the metallic pieces and shipped it down to Berlin. The album is planned to be released in about one month (late April).
- Quorthon / Bathory interview, Backstage #6, 1990

The music is a bit different. On "Under The Sign..." we had one song called "Call From The Grave" and one called "Enter The Eternal Fire". Those two were different due to the fact that they were not fast. They were slow and a bit different musically. When that album was released we got loads of letters from fans all over the world who wanted us to continue in that way and asked if we could do more songs like that on the next album. On "Blood Fire Death" we made the title track and "A Fine Day To Die", but we didn't go all the way, there were actually more speed songs on that LP than on any other LP - to state that here are as much speed as you want. On the new LP, "Hammerheart", we only have songs like "Blood...", "A Fine Day To Die" and "Enter The Eternal Fire". There are but heavy stuff there plus one ballad with acoustic guitar, solo vocals and a 16 channel choire - like "Beth" with KISS. We did it to show that we can do other things too.
- Quorthon / Bathory interview, Backstage #6, 1990

After two albums on Under One Flag / Music for Nations - Under the Sign of the Black Mark and Blood Fire Death - BATHORY signed to German label Noise.

We changed record company from the English Music For Nations (their Under One Flag label) to the German Noise. The reason we did it was partly because our contract with MFN was out but also because our producer and manager BOSS distributes Noise, SPV and all those German labels in Sweden. His entire business idea is 99% together with Noise. So it was practical for us to go to that label. Now he can work with all the albums he normally works with, and with us too, at the same time.
- Quorthon / Bathory interview, Backstage #6, 1990

Bathory - Home of Once Brave

'Home of Once Brave' is about Sweden from when the country rose up from the ice age until the day when we gave our country away, politically, ideologically, financially. I'm sure the Swedes had a much better life before Christianity came along.
- Quorthon / Bathory interview, Kerrang!, 1990

A video was produced for "One Rode to Asa Bay". You can watch the video, read about the planning and filming, and why the song was dedicated to Mr. Dean Andersson.

We are just about now organising all the people that will be involved in it. I'm checking out places and so on. If we take pictures from a helicopter it will probably be on Iceland or something like that. If you saw the "The Shadow Of The Raven" and "The Raven Flies"-movies + a few Conan movies you might get a picture of what it will be like.
To place something on a stage, do it with playback and have 500 Metal kids in front is like spitting in the face too. We can do something different with the help of pictures of big mountains and things like that. We are making a movie of the lyrics, with a story. The song we will probably use for the video is entitled "One Rode To Asa Bay". It's about Christian missionaries who came here 900 years ago.
- Quorthon / Bathory interview, Backstage #6, 1990

Yes, we did a video for Hammerheart, back then people had been nagging us for years to record a video and I said, it's no use, it costs too much and no one will play it anyway - back then hardly any of our songs were shorter than eight minutes. But they made got us to do a video... on which I wasted 25000 SKR of my own money to rent armour, horses, girls who would be in the video, clothes, build a Viking village and so on. We poured 50 litres of gasoline into a lake by a big cave and ran around in lots of caves...
All over Stockholm, Lidingö, Birka, Ekerö, everywhere. I think we had 14 hours of film when we were finished. The problem was that I was going out on a two month promotion tour ten days later to do interviews in practically every magazine there is, and radio, TV in England, Super Channel, MTV, the lot.
So the video had to be finished. We gave all the material to the guy who had filmed everything. He promised he would make a raw copy. The days passed and we called him but he never got back. So if you have air tickets and have to go...
Eventually we had to accept this raw copy and I said I didn't want it to be sent out, because the things we do for European TV probably will not be broadcasted for two weeks or so, so there's time to mix it and then send a copy of it to them. But for some reason this video came out without my knowledge. So I haven't seen this video and I won't do it either, because I spent so much money on it and all those 14 hours of film...
...we worked 24 hours a day for two weeks. I lost 11 kilos during that time. I spent almost all the money I had, I sold a lot of my records to be able to afford renting horses and stuff, and food for everybody.
- Quorthon / Bathory interview, Heathendom #1, 1996

On the chance you might be interested in how that dedication came about, in early '88 I was working on a novel about Elizabeth Bathory. Two of the main characters were metal fans (the book, a paperback called RAW PAIN MAX, was published here in the USA in Dec. '88--it has a contemporary setting, mostly, and takes place, mostly, in and around Dallas, Texas... 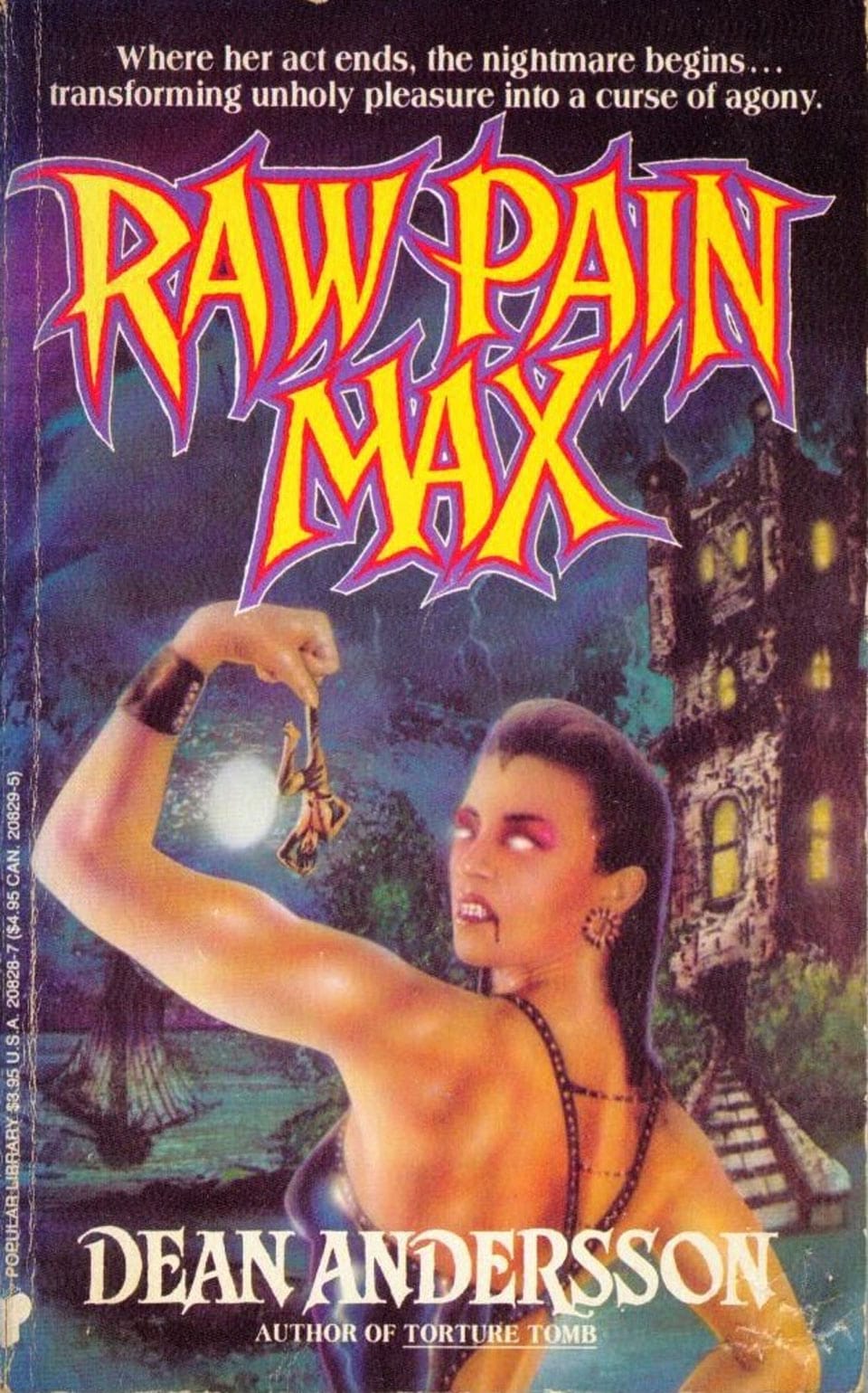 ...of course I wanted a quote from Quorthon's "Woman of Dark Desires" in the front of the book and wrote to him for permission to quote. He wrote back and gave it. In thanks, I sent him some of my earlier novels. He was beginning his change from Black Metal to Viking Metal at the time, and it turned out he especially liked a sword and sorcery trilogy I had written under the pen name of Asa Drake, three tales featuring a woman warrior, Bloodsong, in an ancient Scandinavian setting, WARRIOR WITCH OF HEL, DEATH RIDERS OF HEL, and WEREBEASTS OF HEL. When I bought a copy of HAMMERHEART, I then discovered that he had dedicated "One Rode to Asa Bay" to me, and I take the Asa in Asa Bay to be related to my pen name, Asa Drake.
- correspondance from C. Dean Andersson to Gavin's Bathory fansite 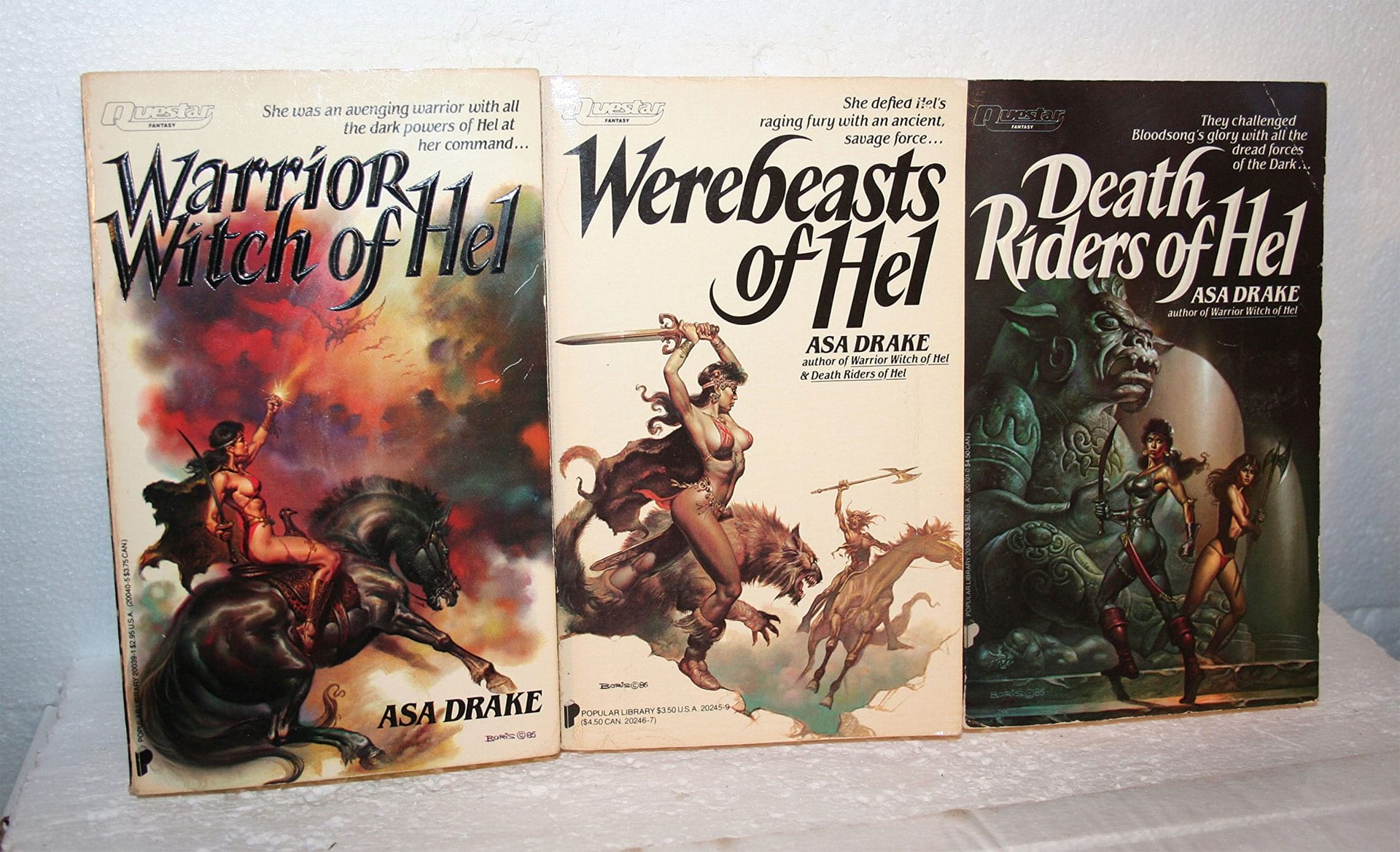