Following a series of incredible demos between 1998 and 2002, NUIT NOIRE - Tenebras and Akhron (Andy Julia), later of SOROR DOLOROSA, DARVULIA, PESTE NOIRE - began recording their debut album, Inner Light, in the summer of 2003.

Unreleased for over a decade, existing only in tape trading circles, Inner Light is now finally available on CD and LP.

Here is the story of Inner Light with new words (October 2017) from Tenebras (guitars, vocals) about the history of this recording and the band. During the recording of Inner Light Tenebras decided to incorporate a new vocal style, adding to his wild howls the now familiar singing (which Andee at Aquarius once described as a mix between Roz Williams of CHRISTIAN DEATH and Mark E. Smith of THE FALL). A relatively dramatic change, but one which was not entirely voluntary.

At the time I was also starting playing with my old 80's heavy metal tribute band METAL FIRE, I was drummer and also back vocalist. Somehow, during the first rehearsals I broke my voice, I couldn't even talk during many days after that and it probably put a trauma in me. When I had to record the vocals for Inner Light maybe two weeks after that, I couldn't really let it burst and anyway I didn't naturally want to let it burst, I didn't want to scream permanently anymore. And you could hear on the tape that there was no more the fury of before.

Although we could draw comparisons to singers like Williams, were there any influences behind the vocal change?

Not at all. Before re-recording the vocals I simply "rebooted" my mind and started to sing just following my inner instinct, and it gave what it gave. Attila recorded De Mysteriis Dom Sathanas probably with the same kind of spirit, even if I don't sound like Attila at all. I think some of my intonations on Inner Light can remind the voice of the woman in THE MOON LAYS HIDDEN BENEATH A CLOUD, though.

The fallout from the vocal change is an important moment in the band's history as it became the last recording between the brothers, with Akhron leaving, and led to this debut album being shelved for over a decade.
The intense reaction was not limited to the band. "There were all kind of reactions, some thought that it was the shittiest music ever recorded, and some thought that it was pure genius. Provoking strong reactions, good or bad, is the best reward I could get."

Tenebras first introduced the idea of the vocal change "straight after the re-recording, and he didn't like it right away."

Andy, at the time, had a pre-made scenario of the release of this album: the big Drakkar Productions hit following the best-seller demo tapes, the enchanted fans and the eventual following tour. But my vocal change was compromising all this, it was too much of a drastic change. He would have been okay to instill progressively some "new" vocals but not everything at the time. I proposed him to re-record the vocals and become the main vocalist, but he didn't want to. We were stuck. So he ended to leave the band.

I was always considering our duo as a solid unit, and after this I was questioning myself if I should continue NUIT NOIRE or not. But I decided to continue and transform it as a one-man project.

The original version of Lutina (2002)

Inner Light is vintage late-demo-era NUIT NOIRE: magical and atmospheric black metal. Akhron's furious blasting drums, an impressive final performance! Tenebras' guitar tone and playing style unlike anything or anyone else.
It's no surprise the material feels like a continuation of the demos and the well received Lutïna EP as the material was all formed around the same abundant three year period at the turn of the millennium.

I found back a rehearsal tape of September 2002 where we played the album entirely. Inner Light could have been recorded in 2002 already, but for timing reasons it just happened in 2003.

At this time there was a big delay between the composition time and the recording time in NUIT NOIRE. Most of the songs of Lunar Deflagration [the first public album] were already written when we started to record Inner Light, with the purpose of being recorded with Andy one day. And they were already "old" when they were recorded [in December 2003].

The NUIT NOIRE sound was discovered early on their demos, within a year of forming. Over the first five years their playing ability improved dramatically. As a duo Inner Light is the peak of their execution. "Quand la nuit tombe" for example - first recorded for the Once Upon a Night demo - demonstrates their absolute precision.

You may have heard some of these songs - Tenebras re-recorded them alone for later splits with CALL ME LORETTA, CIRCLE OF OUROBORUS and HIS ELECTRO BLUE VOICE - but not like this... two brothers calling on night spirits somewhere in Southern France, producing some of the best music we've experienced.

Inner Light has existed in tape trading circles for years but I don't think any of us expected it to ever be more than that. To finally have an official release in best quality, direct from the masters, is the most welcome news this year!

Inner Light definitely is the debut album, and it represents the climax of the first era. The recording was some of the biggest bursts of energy in the career of Nuit Noire, and the problems we had with it engedered some truly sad and melancholic moments. But luckilly we never became ennemies for that. We had turned the page a long time ago and took different paths, but it is great to see it released, and it was great to play "Can You See The Light?" together on stage in Paris during the Nuit Noire tour of 2015!

With over ten years hindsight, whatever turmoil this album caused, it can be viewed, hopefully with some objectivity, as one of their greatest accomplishments. Now, at last, unearthed!

We used to do just a few rehearsals per year, and a few concerts, so each time playing together was an event and gave a really furious moment, just like when some pressure held during a long time is released all at once. But I will now say something that I never said anywhere and to anyone: after the serie of concerts we had done around 2002 following the release of Black Form and Somewhere In The Nightpast, I was starting to feel like we were not that really different from any other "black metal" band although in the mind we truly were, and that we could go beyond. The idea of re-shaping the band came to me, I developped this idea and was actually thinking of having a group of female singers who would represent the fairies. But I never told anyone and it was never made. And when I started to sing with the "new" vocals, I was happy with it and kept it this way until now. The 1998-2003 era was great at the time, but I would definitely not have pursued like this forever.

One of the best moment of my life, 200 people in the venue of our childhood village watching us on a big stage playing almost all the songs we had at the time, it is hard to describe it with words, it was just an explosion!

We did two "happy" concerts after this one in February and in May of 2003, then there was the recording in summer that went wrong, and then we did one "sad" concert on October 11th, birthday of my brother who had to play the most horrible show of his life, having to stand my "shitty" vocals on stage, eheh. After that he took part to the 10 years anniversary show in 2008, we played almost entirely Inner Light plus some demo songs, and then this gig in Paris in 2015 where he borrowed the drumkit of ALUK TODOLO to play some Inner Light and demo songs with me. If we don't record albums together today, it is just because of timing problems, he is too busy with SOROR DOLOROSA and his job, and I am too busy with my family life. So we could never find a moment to record together again, but maybe one day... 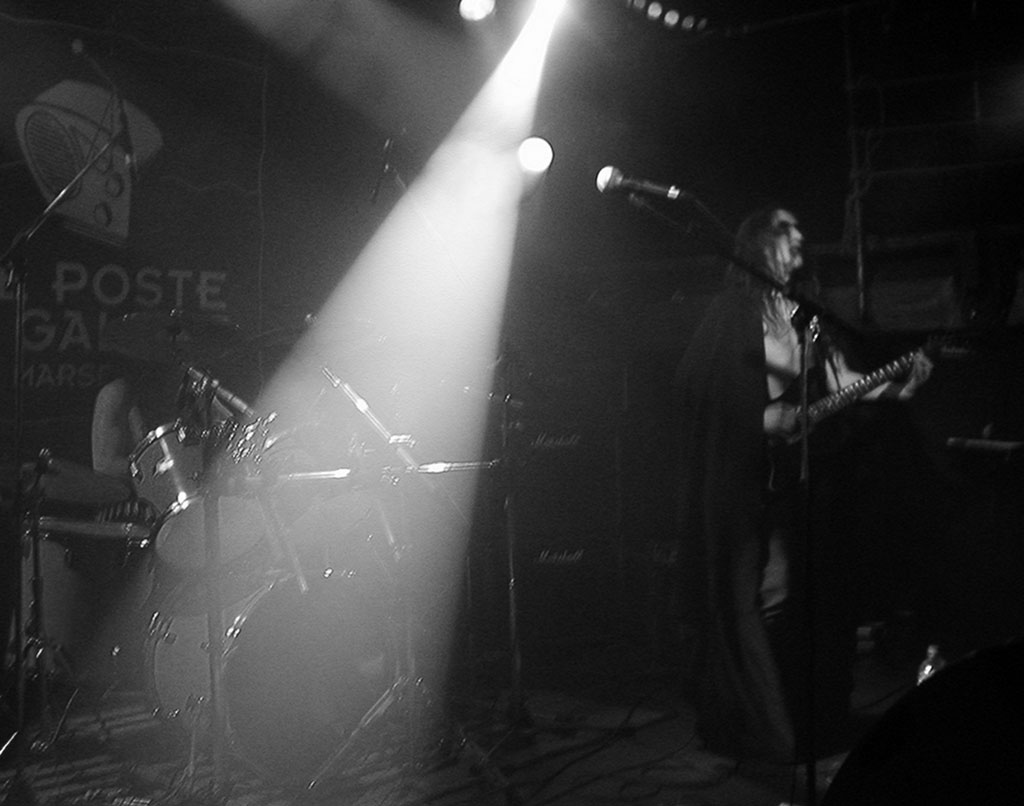