Swedish black metal with strong inspiration from the Swedish metal (black and death) scene in the early-mid 90s, CWEALM released their debut album, Odes to No Hereafter, in September 2016.

" Bored with a life devoid of sinister creativity, Astraeus took stock of his situation and began to give concrete form to the echoes of his inner wrath. A journey started where revisiting old classics (Mayhem, Dissection, Burzum, At the Gates) led to the composing of seven occult hymns and, finally to the recording of his first full length album, Odes to No Hereafter in 2015-16.
Guitars, bass, keys and vocals were laid at Studio T4 Berghof (Gothenburg, Sweden). With the help of longtime friend Gabriel Lugo Mendez, drum programming was the next crucial step, but the aim was always to get a real drummer. Thanks to Tore Stjerna, contact was made with Jocke Wallgren (Amon Amarth) who nailed the drums with full force at Necromorbus Studio (Stockholm, Sweden) where the album was subsequently mixed and mastered.
A core concept for Cwealm is - and will always be - misanthropy. Aimed as a tool to spread hatred for mankind and promote the worship of death, the project embraces the incisive credo of E. M. Cioran:
"Life is nothing; death, everything." 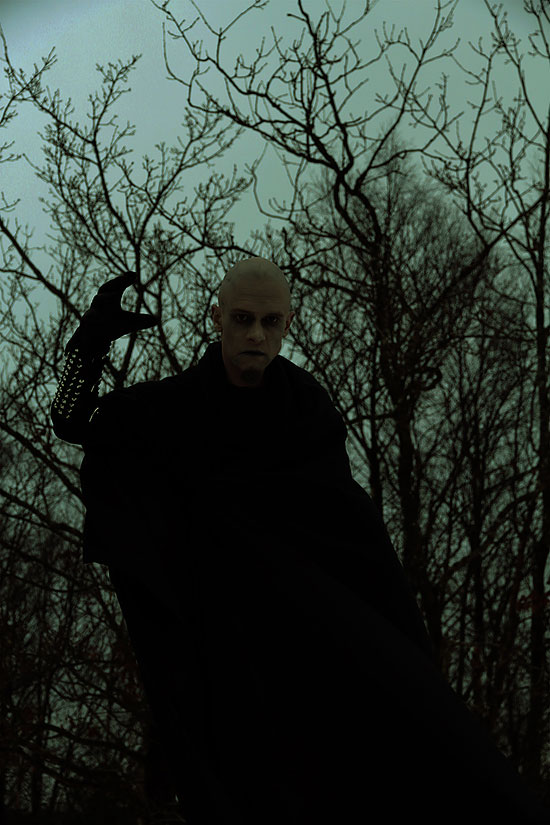 Cwealm arrived immediately and without warning with the first album, is this your first metal band, have you been playing other music?

This is not my first metal band, no. I played in a black metal band in the early 2000s and have been involved in a couple of more or less unserious constellations too, but this is my first serious musical project in a long time.

I read you have been writing black metal for some time but not seriously, or at least to not a standard you were happy with, until 2014. Can you remember how long you have been considering making a black metal record?

Correct. I had written two songs and then had a very long break, where I wrote riffs but never felt I could put them together to create something really interesting, or never cared to. I've been considering making a black metal record since 2014. Before that, there was no plan for anything, just the odd thought, on and off for many years.

One of the noticeable things about your sound is the relatively clean guitar tone, what equipment are you using to play and record?

Yeah, I guess it turned out that way. I actually lined the guitars, then Tore Stjerna (Necromorbus of the eponymous studio -ed) reamped them according to guidelines that we'd discussed. I think he used a Peavey 5150. Ironically, I own one of these myself and actually like it very much, but I hadn't played with an amplifier for years so I thought it better to leave the amping to someone else.

I have almost no knowledge of music theory at all, haha, so on that part you're wrong. (Actually, it was during the recording that I finally memorized the names of the six guitar strings...) But sure, classical music has influenced me, Sibelius, Mussorgsky, Saint-Saëns, Webern, Tchaikovsky and so on. The influence has been quite indirect though, with the exception of Chopin; the piano parts on the album are directly influenced by him.

Scandinavian bands you've been compared to were incorporating 'progressive' metal influence during the mid 90s. Beyond bands like AT THE GATES, DISSECTION and maybe EMPEROR do you find influence from progressive metal?

Well, an obvious one is Atheist, at least in certain songs or parts of songs. Both Piece of Time and Unquestionable Presence are awesome records. Otherwise, I don't really know right now.

Your cover is a reproduction of a Goya miniature, can you explain why it was chosen and what it represents for the album?

The Goya painting was carefully chosen, since it conveys - to me, anyway - a sense of impending doom which connects well with the lyrics. They revolve in different ways around an Endlösung to a problem: that of humanity, the universe (as we know it) and the abrahamitic virus.

One song (Kadavret) takes lyrics from Baudelaire's grim poem (Une Charogne / A Carcass), do you remember when you first read this?

Yeah, I remember reading "Kadavret" for the first time. It was sometime around 2004. In the same period I also read Stagnelius' "Till Föruttnelsen" ("For Decay") and something really thrilled me with these morbid yet delicate texts about dying bodies. I remember reciting Baudelaire's poem aloud to a friend on the tram - where some travelers looked more than a bit confused, hahaha.

The skies watched that proud carcass, lax or taut,
Bloom like a flowery mass.
So pungent was the stench, my love, you thought
To swoon away upon the grass.

Horseflies buzzed loud over this putrid belly,
Whence sallied column and battalion
Of sable maggots, flowing like a mucose jelly,
Over this live tatterdemalion.

Did you change the structure of the poem for the song? You also use both English and Swedish lyrics on the album, was there a reason for using each language for specific songs?

Correct. I excluded some stanzas, since the song didn't really leave room for them.
As for the use of two different languages, it all just turned out that way. No plan there, really.

You recorded everything except drums during the summer of 2015. Any stories from that time about the process and difficulties of recording each individual section?

Not much actually, but it was a challenge to keep everything in tune. I get a little obsessed with things like that, and of course, if you're recording everything yourself you have to be. The bass was kind of a challenge, too, but I managed to nail it in the end.

Drums were then recorded by Jocke Wallgren of Amon Amarth at Necromorbus. How did this collaboration come about?

It was through Tore. I had sent him the midi tracks of the programmed drums, but then I guess I hinted that I'd really liked to have a real drummer, and he said he had a candidate. And after listening to some tracks with Jocke, the choice was easy to make.

The final recording was mixed at Necromorbus, did you sit in during this process?

I did not sit in, no. Our contact was strictly via mail. But we had a very thorough conversation going on and so it all worked out fine.

Did you have a click track ready for the drums or were they recorded live with your unmixed recordings?

Final words are yours!

Thank you for the interview, and I wish you the best of luck with Todestrieb in the future. Also, a million hails to everyone who has supported Cwealm thus far.
Pulvis et umbra sumus.